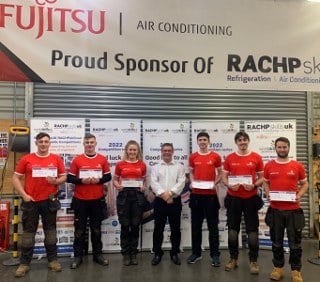 At the recent WorldSkills event for Refrigeration and Air Conditioning held at Barking and Dagenham College, Glasgow Kelvin College student Scott Ballantyne competed against the best six young students in the UK in the RACHPSkills competition.

23 yr old Scott, from Airdrie, had been selected for the competition after qualifying through a regional heat held at the Springburn Campus in May and entered the competition half a mark below the highest qualifier in the UK.

After five days intensive competition the competitors had to wait until the live WorldSkills awards ceremony held on Friday, 25th November to find out the placings, where Scott was confirmed as placing 2nd and winning the Silver medal. This is a huge accolade for him to be awarded this at a UK national skills competition and is a real feather in his cap for his future career.

"A silver medal is an outstanding result for an outstanding student, to travel down to London and perform the way he did is a credit to Scott, his family, and his employer who should be very proud of his achievement."

"Scott has always excelled in his role as an engineer at ALBANNACH EINNSEANAIR LTD and this award is recognition of his hard work and commitment."

“I want to pay a big thanks to Alan Burns, everyone at Albannach Einnseanair Ltd, the lecturers at Glasgow Kelvin College and everyone who has supported me along the way.”

Everyone at Glasgow Kelvin College would like to congratulate Scott and his tutors, wishing each of them all the best for the future.